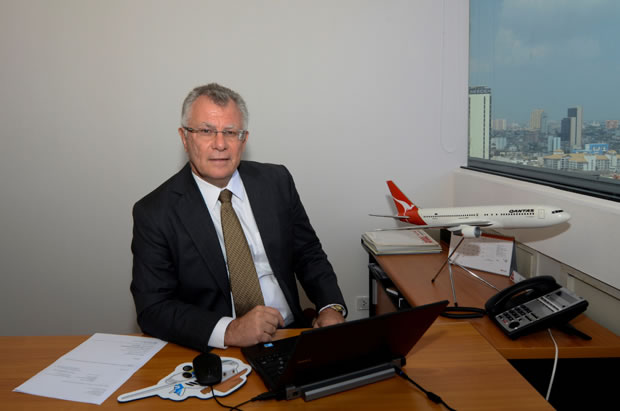 Bob Everest was recently appointed Manager Thailand and Vietnam for Qantas. Previously he was Qantas Manager South Australia based in Adelaide. He has also a strong knowledge of the Asian region having worked in Indonesia for 4 years as the Qantas Country Manager and in Singapore as Revenue Development Manager for both Qantas and British Airways for another 4 years. His job role is commercial focused.

Business for Qantas changed on 31st March 2013, the 17-year-old joint service agreement with British Airways was concluded; it was also the start of a historic partnership with Emirates. Before the Qantas network offered five one-stop codeshare destinations into Europe and the UK. Now it offers more than 30 destinations into Europe on the combined Qantas and Emirates network. 30 years ago the Middle East was the stopover on the kangaroo route for flight operating in and out of both Sydney and Melbourne. Now flights are operating as they once did Sydney/Dubai/London and Melbourne/Dubai/London. The new network will cut average journey time by more than two hours to the top 10 destinations in Europe.

“Thailand has been a strong market for Qantas and with our partners I look forward to growing our business,” says Bob. “Indochina, India, and the Thai domestic market are the three key sectors for Bangkok. With our new schedule our flight from Sydney arrives two hours earlier in the afternoon making it better for connections. The aircraft turns around to arrive back into Sydney early morning.” “I am also responsible for sales out of Vietnam,” he says. “We have a block code share on direct flights with Vietnam airlines (VN) to and from Sydney. They also have the option of selling seats with VN connecting with our southbound service out of both Bangkok and Singapore.”

“I have only been in the job for a couple of months and I am still learning what works and what doesn’t” he says. “We need to be a bit more aggressive in our selling strategy and need to be selective and work with those travel agents who can deliver the passenger and not cancel and give us back seats at the last minute.”

“Clearly Australia and New Zealand are our core market in Bangkok,” he says. “However by working with our partners Bangkok Airways for Thailand domestic destinations and Jet Air for flights to India we will be able to enjoy additional small slices from many pies.”

“By the end of this year we will have installed flats beds in Business Class on our A330 aircraft operating in and out of Bangkok in a 2-2-2 configuration offering premium passenger an Express meal service and a turn down service with a duvet and sleeper suits on our night flights.”

“Qantas and Emirates offer 98 eight flights between Australia and Dubai. Qantas is the only foreign carrier using the A380 facility in Dubai and our flight from Sydney and Melbourne operate through to London. Dubai International Airport is the geographical centerpiece of the partnership. A major benefit is the range of products being offered to frequent  flyers. Having a cluster of airline partners make Qantas a more global carrier.”

“Another benefit is harmonizing of baggage policy between the two carriers,” he says, “now the Qantas Economy checked baggage allowance is increased from 23kg to 30kgs and to 40kgs for passengers in Business. Now they can spread the allowance over multiple pieces of baggage and not restricted to one piece as before.”

Australian designer Martin Grant has launched the first new uniform for the airlines 12,600 uniformed staff, which they will be wearing from early 2014. It is said to speak of Australian style on the global stage. Against French navy suiting and white shirting he has added variations of the Qantas red, a ruby red and fuchsia pink, featured in diagonal stripes recreating the idea of the Qantas triangle, across tops and dresses for women and ties for men. “I strived for something simple and durable,” says Martin, “while adding a bold color palette. I wanted to create a uniform that re ected the glamour of  ying and something that would suit every body shape.”

The Qantas Wine Panel ensures the best selection of Australian wines is delivered to Qantas customers. The range includes the latest wines made by boutique winemakers to the iconic drops that form the very base of Australia’s great winemaking legacy.