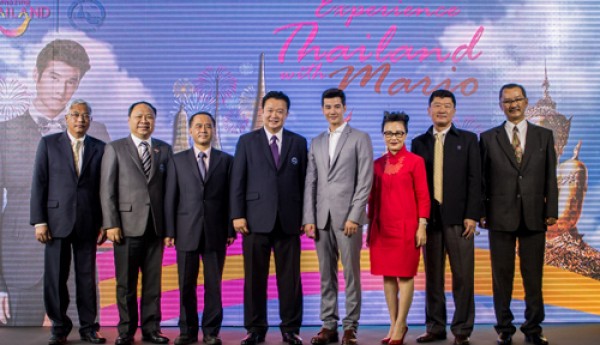 Launched on 19 April in Bangkok, the “T-Pop” campaign will see Mr. Maurer participating in a number of high-profile activities and events in China, Indonesia, the Philippines and Vietnam where he has a fan following of nearly one million in each country and more than 5 million in China. Known officially as “Experience Thailand with Mario Maurer”, the campaign will continue until March 2017. It will include a number of media functions, dinners and other events in Beijing, Guangzhou, Manila, Ho Chi Minh City and Jakarta.

Mr. Maurer is the son of a Thai mother and German father, who has generated millions of youth followers over mainstream and social media as a model and star. A successful campaign with him was carried out only in China in 2015 and is being expanded to Indonesia, Vietnam and the Philippines this year.

Mr. Yuthasak Supasorn, Tourism Authority of Thailand (TAT) Governor said, “The next generation of potential travellers is going to be young people, especially within Asia. We are happy that Mr. Mario Maurer has agreed to work with us in promoting tourism to Thailand amongst this new emerging market.”

The marketing and PR activities are projected to generate several thousand “likes” and “shares”, giving Thailand millions of Baht worth of publicity across blogs and websites, newspaper and magazine articles, and TV/radio.

China is already Thailand’s largest and fastest growing market with 7.9 million arrivals in 2015 and projected at 10.5 million in 2016. In turn, Indonesia, the Philippines and Vietnam, are the three most populous ASEAN countries, with a sizeable demographic profile of young people.