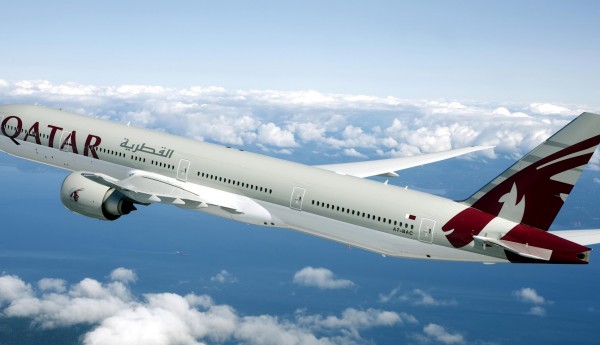 Award-winning airline will fly daily to Auckland, its first gateway to New Zealand.

It was a historic moment for Qatar Airways today, as it launched its new record-breaking Auckland service on one of the country’s most significant days of the year – Waitangi Day. As the first Qatar Airways flight touched down on the North Island of New Zealand, just after sunrise – a new chapter in the airline’s history began.

Celebrations to commemorate the launch of the world’s longest commercial flight, which takes 17 hours and 30 minutes and covers a distance of 14,535 kilometres, began at the airport with a traditional water salute as the Qatar Airways Boeing 777 taxied down the runway.

H.E. Mr. Al Baker said: “The launch of our new service to Auckland is an important milestone for Qatar Airways as we expand both in the region and globally across our network providing more options and better connections to exciting business and leisure destinations in Europe and the Middle East.

“Arriving in Auckland on Waitangi Day, and achieving the title of world’s longest flight for the return record-breaking service, which covers a distance of 14,535 kilometres and lasts 17 hours and 30 minutes, makes this an even more momentous occasion for Qatar Airways and provides another accomplishment to celebrate in this our 20th year flying the flag internationally for Qatar.”

His Excellency Jeremy Clarke-Watson, New Zealand Ambassador to the State of Qatar, added: “Welcoming Qatar Airways to New Zealand, through this direct service, is a significant event in the New Zealand Qatar relationship – opening up greater people to people and business to business connections between our two countries.

“We look forward to welcoming more Qatari and GCC nationals to New Zealand, taking advantage of New Zealand’s 90-day tourist visitor visa on arrival for GCC citizens. We also look forward to working with Qatar Airways and New Zealand exporters to maximise the potential of the direct service’s freight capacity, which opens up a whole new market for our exporters particularly in fresh food and beverage.”

Qatar Airways’ first flight to New Zealand flies over the city of Auckland on its final approach to the airport.

Auckland is the first city in New Zealand to be served by Qatar Airways and will provide a gateway for travellers to visit the stunning country, which is famous for its spectacular coastlines and lush forest landscapes.

The new daily flight to Auckland is served by a Boeing 777, which has a two-class configuration with 42 seats in Business Class and 217 seats in Economy Class. Passengers travelling on board the Qatar Airways Boeing 777 to and from Auckland in Business Class can enjoy one of the most comfortable fully-flat beds in the sky with 78 inches of seat pitch. In addition, the on-demand à la carte menu service allows Business Class passengers to order anything from the menu at any time during the flight. The aircraft also features the airline’s award-winning Oryx One entertainment system, offering up to 3,000 entertainment options on individual screens in all classes.

Passengers travelling on the inaugural flight were welcomed on board with special cupcakes, in addition guests travelling in Business Class received a celebratory Kiwi Rose Fizz mocktail, both created to commemorate the new service. Bespoke menu cards and beverage lists inspired by a traditional Maori carving were also designed especially for the occasion.

The Doha-Auckland-Doha daily services will offer 116 tonnes of belly-hold capacity every week to support the growing imports of raw, industrial and consumer materials into New Zealand. At the state-of-the-art Hamad International Airport cargo terminal, Qatar Airways Cargo offers QR Fresh, a seamless temperature-controlled handling and storage solution, to deliver perishable products such as dairy produce, meat and fruits from Auckland into the Middle East and on to major European cities.

The inaugural flight’s arrival from Doha into Auckland Airport was captured by New Zealand’s leading aerial cinematography specialist Tony Monk who filmed the Boeing 777’s approach and descent on to the runway. Tony Monk is best known for his aerial photography work and cinematography for the Lord of the Rings trilogy, and has been awarded an accolade for Services and Safety to the Film Industry.

Passengers planning to travel to New Zealand are encouraged to include a stopover in Doha as part of their journey. With a new transit visa scheme offering visitors a free transit visa for up to 96 hours, it is now even easier to combine a quick visit to Doha – with its historic sites, five-star shopping and resorts – with a trip to New Zealand. Visit Qatar Airways at http://www.qatarairways.com/us/en/qatar-transit-visa.page for more information.