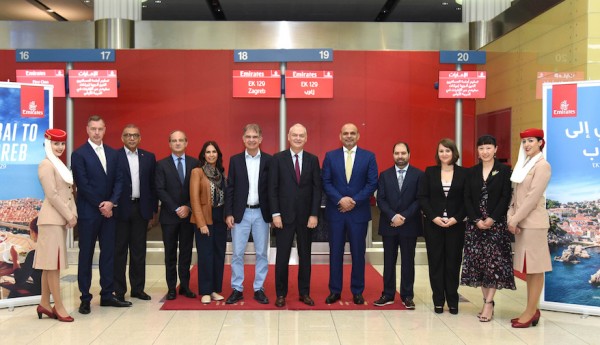 Emirates’ inaugural Boeing 777-300ER flight from Dubai touched down in Zagreb to a water cannon salute and traditional Croatian folk dancers, with more than 350 passengers on board.

In the flight deck of the B777-300ER operating the inaugural flight, were Captain Rashid Al Ismali from the United Arab Emirates and Croatian-born First Officer Marin Zdrilic. Emirates employs more than 250 Croatian nationals – as pilots, cabin crew and in its ticket office in the Westin Hotel in Zagreb.

A welcome reception was held in the airport’s brand new terminal, followed by a press conference, gift exchange ceremony and cake cutting. After the formalities, government ministers, VIPs, airport executives, trade partners and media enjoyed a guided static tour of Emirates’ B777-300 ER aircraft. The tour gave guests a chance to see first-hand the innovative amenities Emirates provides in all three cabins for passengers on board, including its trademark First Class suites, which is currently the only First Class offering on an international flight to and from Zagreb.

“Today is an important milestone for Emirates as we launch full operations into the market and reinforce our commitment to growing trade and tourism flows between Dubai and Croatia. Since establishing our commercial presence in the market in 2003, we have worked with our trade and tourism partners to make this day happen. We thank those partners and especially the Ministry of Tourism and Franjo Tuđman Airport for their support in preparing for introduction of our daily flight and the event today,” said Thierry Antinori, Emirates’ Executive Vice President and Chief Commercial Officer.

We look forward to continuing the successful partnerships we have formed over the coming months and years,” he continued.

“I am very pleased to have the opportunity to welcome Emirates in Zagreb on behalf of the Government and the Ministry of Tourism of the Republic of Croatia. We believe that this direct daily flight between Dubai and Zagreb will bring many benefits to our country. Namely, it will enable significant increase of trade relations between countries and will have the especially positive impact on tourism. With Emirates daily flights, Croatia will not only become the centre of Southeast Europe in connection with the Middle East – the most propitious part of the world in terms of industrial growth, but will also be connected with many other countries like China, India, Australia, New Zealand, South Korea, Japan, Taiwan“, stated Minister of Tourism of the Republic of Croatia Gari Cappelli, adding that this year-round line will contribute to extending the tourist season.

The new daily flight will open up access to more than 80 worldwide destinations in Emirates’ global network for Croatian travellers and vice versa. Travel from Shanghai, Beijing, Bangkok and Kuala Lumpur, or Sydney and Melbourne can all be achieved with one stop at Emirates’ world-class Dubai hub.

“We are extremely proud of the fact that one of the biggest airlines in the world, Emirates, chose Zagreb as their new destination in this part of Europe and this is even more important if taken in consideration that it comes just after the opening of the new passenger terminal that offers the superior level of service for all passengers and complements the top service provided by Emirates”, stated Jacques Feron, CEO of MZLZ d.d., Concessionaire of Franjo Tuđman Airport.

As with all Emirates flights, passengers travelling on the Zagreb service will be able to take advantage of the generous Emirates baggage allowance of up to 35kg in Economy Class and 40kg in Business Class, and 50kg in First Class.

On board, passengers can discover the ice Digital Widescreen, offering over 2,500 channels of on-demand audio and visual entertainment including the latest movies, TV shows, music, audio books and games. Customers can enjoy the famous on-board hospitality from Emirates’ multi-national cabin crew, as well as gourmet regionally inspired dishes with complimentary beverages.