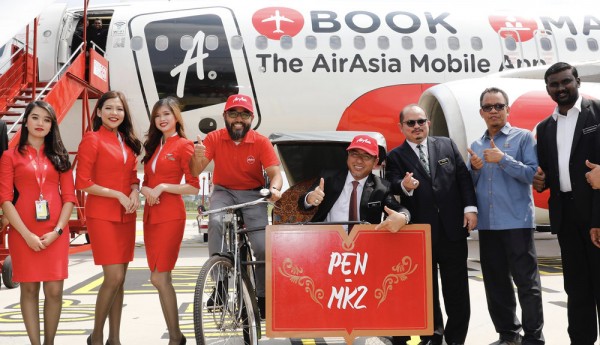 AirAsia, the world’s best low-cost airline for the 11th consecutive year has celebrated and marked the arrival of its inaugural flight from Penang to the historic state of Melaka.

tourists. This year, our target is to hit 20 million tourists. Under the VMY2019 initiative, we’ve introduced a variety of attractive accommodation packages and interesting activities to cater to more international and local tourists. We look forward to welcome more visitors to Melaka through AirAsia’s network.”

AirAsia Malaysia CEO Riad Asmat said, “This is a proud day for AirAsia and the people of two UNESCO world heritage sites and cities – Penang and Melaka. The new route not only provides a boost to local tourism, but also contributes to long-lasting economic growth for the two cities. Our unrivalled connectivity opens up new flying options for the people of Melaka, particularly for those looking to travel to East Malaysia or onwards to other Asean destinations. We wish to thank the state government and all our partners for their support in making this route possible, and look forward to exploring more opportunities to further grow our presence in Melaka.”

AirAsia is currently offering 20% off on all seats, all flights. Bookings are available on airasia.com and the AirAsia mobile app from now until 7 July 2019, for the travel period of 8 July to 21 November 2019. Simply log in and pay with BigPay to access seats at the lowest fares.